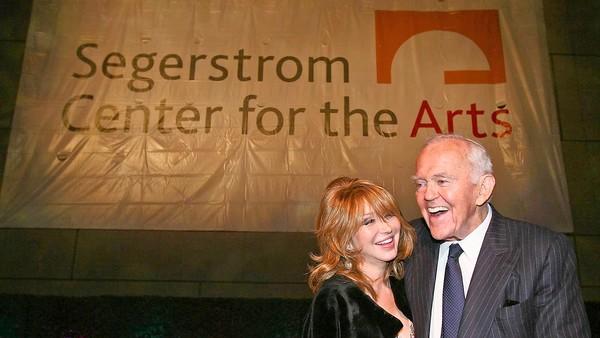 From now on, it’s the Segerstrom Center for the Arts and bears the name of the family that made it one of America’s most respected performing arts venues.

The new name came just in time of the center’s upcoming 25th anniversary.

Jazz artist Chris Botti performed during the event, along with violinist Caroline Campbell and singer Lisa Fischer, who performs with the Rolling Stones.

It was the Segerstrom family who planted a seed on their farmland years ago and donated the plot that allowed the center to grow to its current magnitude, said Thomas McKernan, chairman of the board of directors of the center.

“Countless people have worked to build this institution into the internationally acclaimed arts center and cultural town square that it is today,” he said in a statement. “But time and time again, the Segerstrom family has inspired us all with their leadership and generosity. We are honored to have that commitment reflected in the name of this institution.”

If it weren’t for the family’s vision and imagination, there would not be a Segerstrom Center for the Arts, McKernan said.

Costa Mesa City Manager Allan Roeder, who attended the event, recalled the time when he, members of the Segerstrom family and others from the community sat down at the kitchen table. There, on the family homestead on Fairview Road, they discussed ways to raise funds for the center.

“To bear the name is so richly deserving,” he said.

During the 25th anniversary season, the center will also make available more than 10,000 tickets for $10 each to ensure that everyone in the community has access to the center’s various arts and presentations, Dwyer said.

“This is our way of letting the community know that, no matter who you are, Segerstrom has a place for you and that you are welcome here,” Dwyer said.

The entire Segerstrom family was then invited to the stage, where they were given a round of applause while fireworks illuminated the skies above.