Commissioned by Segerstrom in 1980 for the lobby of the Central Bank Tower, a family-owned office building that has since been sold, Pekin by Alexander Calder is a whimsical painted-steel standing mobile with Calder’s signature hanging elements supported by a stable spine. 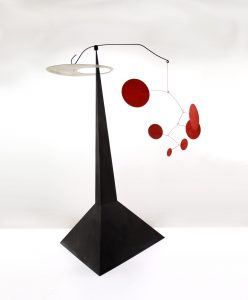 ABOUT THE SCULPTURE
One folded black triangle rises from the floor into a white circle with an off-center hole that rotates around the tip of the tower. A large ring is countered by six red circles of varying sizes connected to series of curved wires. The sculpture derives balance from unequal portions. Nothing is symmetrical, yet all the elements work together in rhythmic unity.

From miniature to monumental, Calder’s works are characteristically direct, spare, buoyant, colorful, and finely crafted. Calder also made ingenious, and frequently witty use of natural and manmade materials, including wire, sheet metal, wood, and bronze. Calder’s works, many of them large-scale outdoor sculptures, have been placed in virtually every major city of the Western world.

ABOUT THE ARTIST
Alexander Calder (1898–1976) was born in Philadelphia, Pennsylvania, into an artistic family. Alexander Calder was the son and grandson of a noted sculptor—his mother was also a painter. After obtaining his mechanical engineering degree from the Stevens Institute of Technology, Calder worked at various jobs before enrolling at the Art Students League in New York City in 1923. During his student years, he made line drawings and oil paintings of city scenes, in a loose and facile style.

In June 1926, Calder moved to Paris where he took classes at the Académie de la Grande Chaumière where he began to carve primitivist figures in wood and his first wire sculptures. In the fall of 1931, Calder created his first kinetic sculpture. The first of these objects moved by systems of cranks and motors, and were dubbed “mobiles” by Marcel Duchamp. Ultimately, Calder invented three idioms for sculpture: mobiles (suspended moving sculptures), standing mobiles (anchored moving sculptures), and stabiles (stationary constructions).

In 1933, Calder and his wife, Louisa, left France for the United States, settling in Roxbury, Connecticut, where they bought an old farmhouse. Calder’s earliest attempts at large, outdoor sculptures were also constructed in this decade. These sculptural predecessors of his later imposing public works were much smaller and more delicate. Calder remained prolific throughout his career in many art forms, experimenting with drawing, painting, watercolors, etching, gouache, and serigraphy. He also designed jewelry, tapestry, theatre settings, and architectural interiors. 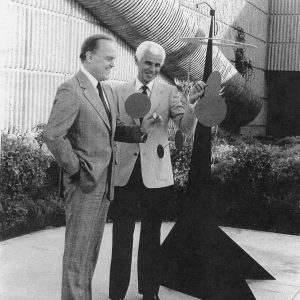 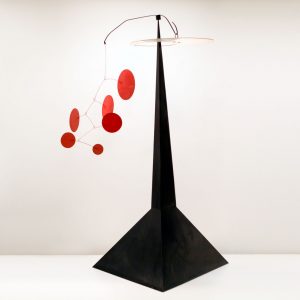 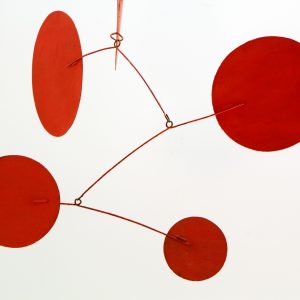 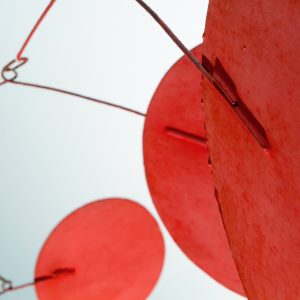 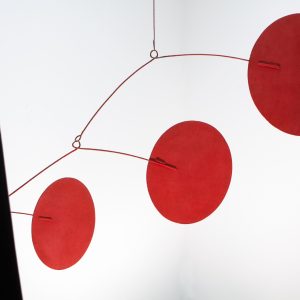