Commissioned by Segerstrom in 1981, the cast bronze sculpture Oiseau by Joan Miró is prominently placed in the lobby of the stunning Center Tower, which is adjacent to Segerstrom Center for the Arts campus.

Though weighty and monumental in size and mass, the bulbous forms and spiky features of Miró’s bird add a touch of whimsicality to the piece, especially given its business-like surroundings. That juxtaposition of the serious and the sublime seems to match what we know of the Spanish surrealist’s sense of humor.

“The animal’s undeniable presence suggests the weight of history, while its improbable form could be the product of childlike fantasies,” is how one critic described Oiseau. “Robust, witty, awkward, and endearing, this sculpture epitomizes Miró’s gift for sparking the imagination with life-affirming artwork.”

To some the sculpture suggests a hybrid—part avian and part human. This and other fantastical creatures by Miró were inspired, according to the artist, by the unconscious mind through dreams.

ABOUT THE ARTIST
Born in Barcelona, Joan Miró (1893 –1983) was a Spanish Catalan painter, sculptor, and ceramicist. Miró attended business school as well as La Lonja School of Fine Arts. After business school, Miró became an accounting clerk in a drugstore where he was overworked, suffered a nervous breakdown, followed by a bout of typhoid fever. His parents moved him to a farm in a secluded village and he eventually attended the Academy Galí in Barcelona. It was there that Miró was taught to draw using his sense of touch alone, rather than sight.

By 1915, the art escapades of Dada were emerging and Miró was fascinated by the art movement’s playful spirit of anarchism. In 1919, Miró took his first trip to Paris, visiting Picasso, the architect Antoni Gaudí, as well as meeting other Catalan painters. By 1924, when the symbolic and poetic nature of Miró’s work was evolving and Surrealism was taking hold as the most powerful artistic force in Paris. He pursued his own interests, which ranged from automatic drawing to Expressionism, to lyrical abstraction.

The Fundació Joan Miró, Centre d’Estudis d’Art Contemporani (Joan Miró Foundation) was formed in Barcelona in 1968, opening a museum in 1976 with a collection of Miró’s drawings and a large selection of his paintings, sculptures, textiles, and prints. In 1980, King Juan Carlos of Spain awarded Miró the Gold Medal for Fine Arts.

A cast of Oiseau also can be found in the Houston Museum of Fine Arts Sculpture Garden. 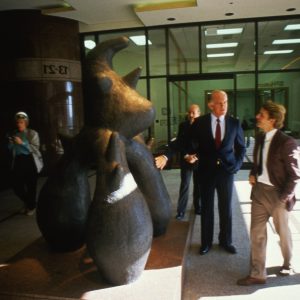 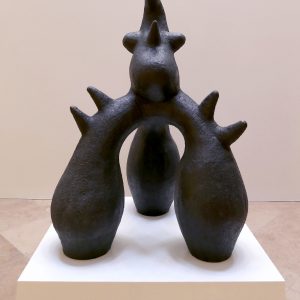 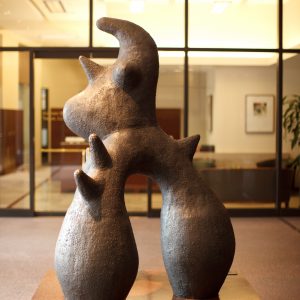 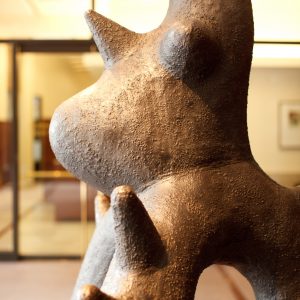 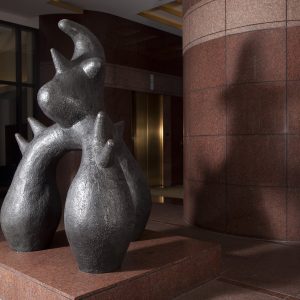