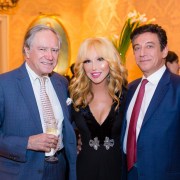 COSTA MESA, CALIFORNIA – February 22, 2019 – Elizabeth Segerstrom gathered with friends from the LA Chapter of American Friends of the Louvre on February 20th, in honor of Kip Forbes, the head of AFL, whilst he was in Los Angeles.  Honored guest for the evening was Todd Smith, Director of the Orange County Museum of Art. The evening was hosted at the California Club in Downtown Los Angeles and guests included Christopher Forbes, Vice Chairman of the Forbes Publishing Company and Chairman of American Friends of the Louvre; John Rossant, the founder and Chairman of the New Cities Foundation; film producer, Frederic Golchan; David Emmesa, member of the Board of OCMA and his wife, Kelly;  among others…  The evening was a celebration of the fostering of French art and culture in Southern California. The evening’s guests included art collectors, patrons and enthusiasts whom all support the Louvre through Mr. Forbes’ foundation.

About The American Friends of the Louvre: AFL is dedicated to advancing the Louvre’s mission through an active grant-making program. It raises awareness of the Louvre’s collections and museum expertise, and helps make the Museum’s exhibitions and permanent collections more accessible in the U.S. and around the world.

Segerstrom Center For the Arts sparked success with a soaring $1.5 million fundraising tally at its 45th annual Candlelight Concert. Heavy hitters like Elizabeth Segerstrom, Moti and Idit Ferder, and Charlie and Ling Zhang strutted down the emerald-green carpet to the tune of carols sung by the Plaza Vista Middle School Choir.