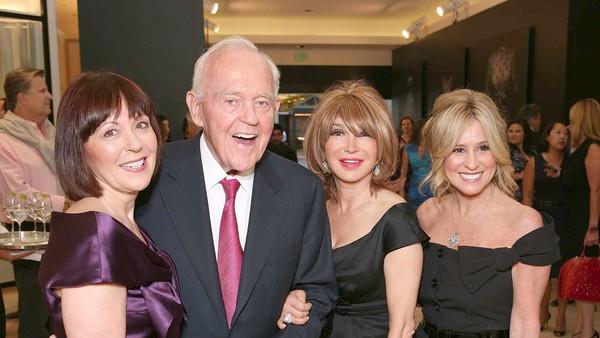 Actress Eva Mendes, clad in lavender Dior, lingered after the ribbon-snipping ceremony at the newly renovated Christian Dior boutique in South Coast Plaza, chatting with guests at the cocktail reception Sept. 1 about, among other things, her admiration for Dior designer John Galliano.

“It’s the age of stylists, when nobody wants to take risks,” Mendes said. “Galliano is out of the box. The difficulty for me is narrowing down the selections to choose what I want to wear.”

Top company executives traveled from Paris and New York for the store-opening celebration and included Sidney Toledano, president and chief executive of Christian Dior Couture; and Pamela Baxter, president of Christian Dior Inc. They welcomed more than 150 party-goers who came to show their support for the Dream Guild of the Juvenile Diabetes Research Foundation, which received a portion of sales related to the opening.

After admiring the treasures in the newly expanded jewelry salon, Elizabeth Segerstrom modeled a $400,000 diamond ring that she borrowed from a display case. Her husband, Henry, is the shopping center’s managing partner.

Dior officials said they couldn’t yet say how much was made for the charity, but because many guests started shopping in the days prior, while Dior remained in its temporary space, and would continue to do so after the party, store manager Lynn Yeager said, “It will be a good number.”