Utsurohi 91 by Aiko Miyawaki is one of the series of sculptures and works of art commissioned and curated by Henry Segerstrom that enhance the performing arts halls, office towers, parks and arts plazas in and around South Coast Plaza and Segerstrom Center for the Arts.

Utsurohi is a site-specific sculpture that is the key artistic element of the entry court for Cesar Pelli’s stainless steel Plaza Tower. Pelli insisted the court separate the tower from its parking structure, and in turn Segerstrom hired renowned landscape architect Peter Walker to effectuate Pelli’s vision.

The dynamic sculpture consists of a series of twelve ten-foot columns set in an elliptical configuration with chromium-plated steel “threads” intertwining in graceful patterns from the top of each column. On the interior surface of each column, a small rough-surfaced rectangle displays a glossy relief image of one of the twelve animals of the Chinese zodiac. Each animal is identified in both Latin and Chinese. In this quiet and subtle piece, there is a hint of the poetic states of the moods of nature. Utsurohi loosely translates to “swift change,” or “transience.” Miyawaki’s work suggests an investigation of philosophical and metaphysical relations between time, space, existence, and eternity, while also focusing on themes related to the alchemy of Mahayana Buddhism.

In a serendipitous artistic evolution for a work of art installed in 1991, the sculpture also appears to be site specific to the Samueli Theater, which debuted in 2006.

Utsurohi stands at the entrance to the theater, which is part of the Cesar Pelli-designed and Renée and Henry Segerstrom Concert Hall. The sculpture’s chromium steel loops atop each of 12 columns serve to frame details of the cultural and commercial structures around it. The work symbolically confirms an artistic collaboration between architects and artists, all inspired by the vision and patronage of Henry Segerstrom.

Aiko Miyawaki (1929-2014) was born in Tokyo, Japan. Although she was trained in the formal cultural traditions of Japan, practicing the koto (traditional stringed instrument of Japan) and the art of Ikebana (Japanese flower arrangement) she found her way out of those conventions, developing her unique contemporary practice in the context of postwar Japan. She studied the history of medieval Japanese art during her days as a student and later, during the 1960s, joined the School of Metaphysics, also known as Keijij Gakuha—a Japanese art movement that developed from Western conceptual art. As her artistic style developed, Miyawaki kept in contact with the avant-garde of Milan, Paris, and New York. 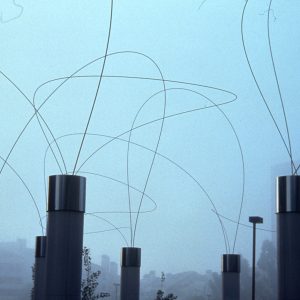 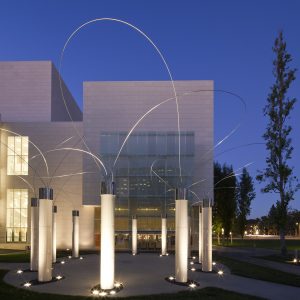 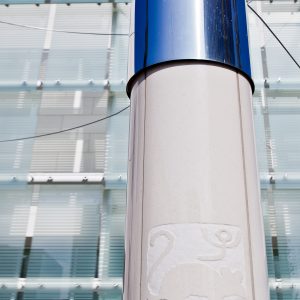 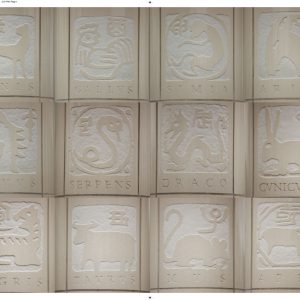 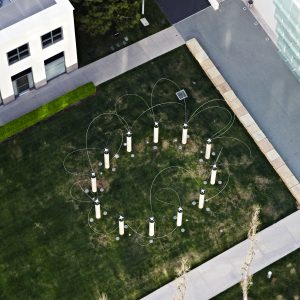