Like many of the Greatest Generation, Henry Segerstrom was affected by World War II’s indelible mark, both in body and spirit as well as in conviction and character. After over a decade of service to his country, Henry would retire from the Armed Services in 1947. Henry returned to civilian life with the rank of Captain, decorated with the Purple Heart and the European Theater of Operations Ribbon with Battle Star.

In 1939, the German invasion of Poland marked the European entry into the Second World War as well as the end of adolescence for many American teenagers. Only a year later, Henry would graduate from Santa Ana High School in 1940 and begin his college career at Stanford University. Upon entry, he immediately enrolled in the Reserve Officer Training Corps (ROTC) at only 17 years of age. Henry would later reflect that joining the service was a natural decision for him and his contemporaries who felt it a matter of duty, entering with a sense of moral obligation. This same sense of allegiance would follow Henry throughout his life as a civic and philanthropic leader in his community and as one of America’s cultural pioneers.

During his collegiate tenure in the ROTC, Henry was trained specifically in Field Artillery which would later become his ground force division while in active duty. However, training on the Stanford campus proved dated in the eyes of many junior officers; Henry would later recount practicing his groundwork with antiquated World War I French 75 canons and equestrian units. Though any training would prove timely as the Japanese attack on Pearl Harbor in 1941 came in the same year as Henry’s enlistment in the Army; sophomore year would mark his formal entry into the Armed Services in 1942. The ROTC (unlike other divisions of the military at the time) held no requirements for recruits to receive their college degrees before entering active service. Thus, Henry entered active duty on his 20th birthday in 1943.

Henry was first sent to Fort MacArthur in Long Beach, California, followed by tenure at Fort Roberts in Paso Robles, California. While at Fort Roberts, he underwent a summer session of basic training, only to be sent back to Stanford for 90 days. He would later remark that this holding pattern reflected the military’s dilemma as to what it was going to do with such a young group of soldiers, mostly 18 or 19 years of age, during such a critical and unpredictable time. It was through the democratization of G.I. life, wherein everyone was an equal, that Henry would later reflect he gleaned his most principled values of hard work, perseverance and focus. Throughout his 10 year military career, Henry felt his greatest lesson was the truth that any whole is only as good as the sum of its parts. These principles would come into play later in his life as he exercised great diplomacy at the helm of his growing business empire in Orange County.

After basic training, Henry was next sent to Officer Training School in Fort Sill, Oklahoma, where he earned the rank of Corporal as well as the highest performance rating in his unit. Following a later stint in Fort Rucker, Alabama, the young lieutenant from Southern California recalled having difficulty adjusting to the culture of the ‘Deep South’. Part of his training down South also included briefly attending the Second Army’s mine school at Camp Forrest, Tennessee, where he became an instructor in aircraft recognition. Henry often told the story that he first learned the recognition lessons only one night before having to begin training newly enlisted soldiers the following day. While training troops at Fort Rucker, Henry received his overseas orders and would next be sent to the front lines in Europe. Departing from Boston, Massachusetts, with 7,000 other G.I.’s, Henry sailed on the British troopship Aquitania on an unescorted voyage to Glasgow, Scotland.

“Then we promptly took the train to Southampton, England, stopping briefly at Liverpool Station in London. I remember it was New Year’s Eve when we boarded another ship for Le Havre, France. On January 1, 1945, we were there.”
—Henry Segerstrom from “Fire Mission: 109 – The History of Stanford University’s Class of 1944, Officer Candidate Class 109 and the experiences of its members in World War II”, Richard W. Keusink, 1999

After arriving in France and a brief stay with fellow troops at the French Army Quarters at Fontainebleau, Henry was assigned the position of forward observer in the 103rd Infantry Division at Alsace. In this critical and respected role, his main task would be to direct fire on German troops from fixed observation points. It was in this post that Henry utilized then newly developed and highly top-secret proximity fuses. Although such technology provided his unit with a new degree of protection, Henry found surprising relevance in the archaic training of his ROTC days.

“Once in a while the German troops moved during the daylight and used a lot of horses. At those times I thought of the day that Colonel Allen called us together at Stanford after Paris fell. The colonel had said: ‘Gentlemen, the first German troops to enter Paris were horse-drawn artillery units.’ I remember he had a note of triumph in his voice. And I thought, there we were on campus, training with French 75s, caissons and horses.”
—Henry Segerstrom from “Fire Mission: 109 – The History of Stanford University’s Class of 1944, Officer Candidate Class 109 and the experiences of its members in World War II”, Richard W. Keusink, 1999

Directly after the U.S. capture of the Remagen Bridge over the Rhine River, the decorated brigadier general Anthony Clement “Nuts” McAuliffe took command of Henry’s division. McAuliffe had earned his notoriety as the acting division commander of the 101st Airborne Division troops having just defended Bastogne, Belgium during the War’s infamous Battle of the Bulge. The general would then lead Henry and his infantry company across the Rhine. Henry would recount a fateful day, shortly after McAuliffe’s appointment, when his troops marched in single file line across a German minefield, most of the company luckily making it to safety in a wooded area. However the troops were quickly caught under enemy fire, unable to dig foxholes for safety due to the hard ground beneath. At that moment, Henry recalled the infantry major standing up and ordering the troops to ‘Move out!’ despite the shrapnel and shelling showering them.

“It was one of the most dramatic incidents I have ever experienced. Despite the intense fire, each and every infantryman stood up and moved ahead. At that moment I realized why every soldier learns discipline. It’s the automatic response to authority that makes a military operation work.”
—Henry Segerstrom from “Fire Mission: 109 – The History of Stanford University’s Class of 1944, Officer Candidate Class 109 and the experiences of its members in World War II”, Richard W. Keusink, 1999 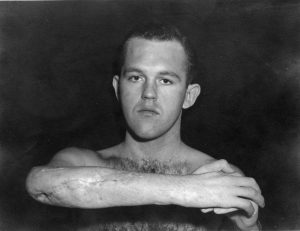 Moving forward toward the Rhine’s crossing, the division came under attack again and Henry found shelter in an abandoned German bunker along with a fellow squad member. In this moment of respite, Henry offered to carry his fellow soldier’s heavy radio transmitter, an act of compassion which would end up saving his life. Unexpectedly, an exploding shell hit the men’s cover, killing his compatriot and severely injuring Henry’s right arm, right hand and lower back. Were it not for the radio and his helmet shielding the explosion, Henry’s fate would have been much more grave. Due to their position in the field, medics were unable to reach Lt. Segerstrom until the following day; once rescued and in a state of shock, Henry was evacuated to a nearby hospital where the attending medic cut off his right index finger which had been rendered useless. Henry recalled this being performed crudely and quickly with a pair of scissors. After fighting for the retention of his right arm, Henry would undergo 19 years of orthopedic surgery, skin grafts, and nerve surgery to regain the use of his limb. He also suffered from osteomyelitis until antibiotics were developed in the late 1980’s to contain the infection.

In 1945, Henry was awarded the Purple Heart and the European Theater of Operations Ribbon with Battle Star in honor of his service and sacrifice. Eventually discharged that same year from a hospital in Marseilles, France, Henry was taken by ship to Charleston, South Carolina, finally settling in Dibble General Hospital in Menlo Park, California. Henry would later remember celebrating V-J Day on his back in a hospital bed. Despite the setbacks of his injury, Henry returned to Stanford to finish his education throughout his recovery. After completing his undergraduate degree, he stayed on to attend the Stanford Graduate School of Business. To simultaneously complete his recovery while earning an advanced degree, Henry exchanged three months at a time in business school with three months as an outpatient in rehabilitation. He would remain active as a lieutenant on the university home front, eventually retiring with the rank of Captain on June 9th, 1947.

“I had been in the Army from the ages of 19 to 30. My service to my country is one of the most treasured experiences of my life. Class 109 can be proud we accomplished what we set out to do.”
—Henry Segerstrom from “Fire Mission: 109 – The History of Stanford University’s Class of 1944, Officer Candidate Class 109 and the experiences of its members in World War II”, Richard W. Keusink, 1999 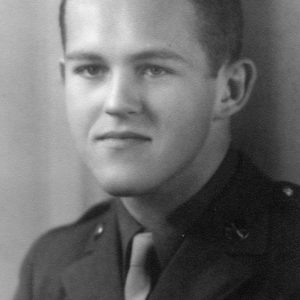 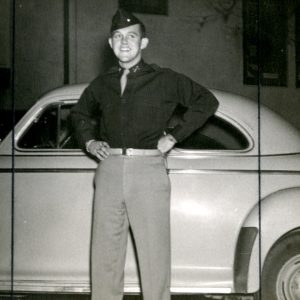 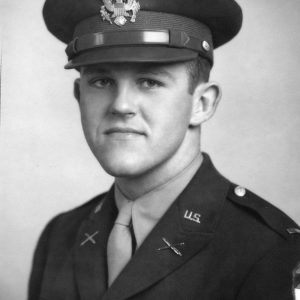 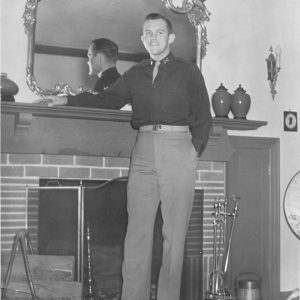 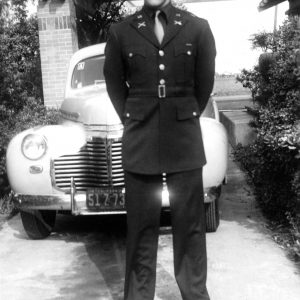 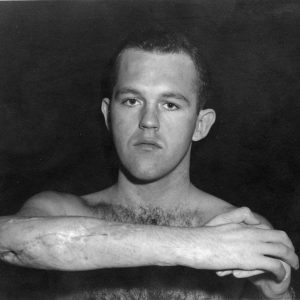 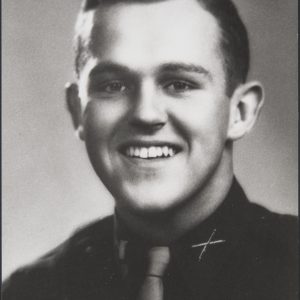