Henry Thomas Segerstrom, the visionary real-estate developer, patron of the arts, and philanthropist died today at his home in Newport Beach, California, at the age of 91 following a brief illness. 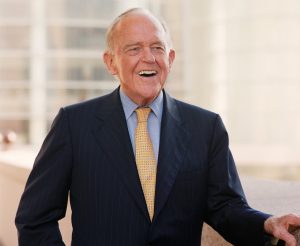 Henry Segerstrom helped lead the world-renowned South Coast Plaza in Costa Mesa, California to become the highest grossing retail center in the U.S. with annual sales in excess of $1.7 billion, and was the founding chairman and major benefactor of Segerstrom Center for the Arts. The death was announced by C.J. Segerstrom & Sons, owner and manager of South Coast Plaza, of which Mr. Segerstrom was managing partner.

Born on April 5, 1923 in Santa Ana, California, Henry Segerstrom was born to a Swedish immigrant family that began farming in the area in 1898. Coming of age in the mid-20th century, Henry Segerstrom was instrumental in building the infrastructure and institutions vital to California’s tremendous growth. His leadership, influence and innovation played a major role in Orange County’s evolution from a largely agricultural region into a cosmopolitan center of culture and commerce. A cultural leader renowned for his brilliance, elegance and humility, he was also a dauntlessly enterprising businessman, who frequently quoted as his personal motto the guiding words he had learned in his military service during World War II: Be bold.

Elected president of his class at Santa Ana High School, Henry Segerstrom entered Stanford University at age 17, but interrupted his studies to enlist in the Army following Pearl Harbor. After training in Officer Candidate School, he was deployed to the European front as a captain in 1944 and was severely injured in combat in the Battle of the Bulge, for which he was awarded the Purple Heart. During his recuperation, he completed his Bachelor of Arts degree at Stanford, subsequently earning a Master of Business Administration from the Stanford Graduate School of Business.

In 1948, Southern California was primed for unprecedented economic growth. Mr. Segerstrom foresaw these changes, and positioned C.J. Segerstrom & Sons to play a major role in the region’s future by leading its transition from lima bean farming to real estate development. Among the manifestations of this new direction by C.J. Segerstrom & Sons was the development of the first air-conditioned office tower in Orange County, a seven-story bank building in Santa Ana.

In 1962 the Segerstrom family began to develop plans to build what would become South Coast Plaza. Against all odds, the retail center would go on to become the highest-grossing in the United States. Perhaps Mr. Segerstrom’s most influential innovation was the addition of luxury fashion boutiques to the retail mix. He began the transition by personally partnering in business with top international designers of the time, opening luxury boutiques with Courrèges, Halston and Yves Saint Laurent at South Coast Plaza. In subsequent years, Hermès opened its first store ever in a retail center and Dior, Gucci and Louis Vuitton soon followed. Mr. Segerstrom envisioned South Coast Plaza as a retail destination that could rival any in the United States, and would play a significant role in developing Orange County into a modern and urbane metropolitan region. His vision has been realized, as today South Coast Plaza is recognized for having the largest and most prestigious collection of luxury retailers in any planned development in the United States.

Henry Segerstrom at the opening of May Co / South Coast Plaza

Mr. Segerstrom’s unfolding civic and cultural vision for Orange County prompted him to lead the Segerstrom family in acquiring and commissioning contemporary sculptures for the retail center and its adjacent properties. Starting in 1973, they acquired outdoor and indoor installations of major works by artists including Henry Moore, Tony Smith, Alexander Calder, Joan Miró, Jean Dubuffet, and George Rickey. Mr. Segerstrom’s effort to create what was, and is, an informal public sculpture park reached its height when, on behalf of the Segerstrom family, he commissioned Isamu Noguchi to create the sculpture garden California Scenario (1982), recognized as one of the artist’s most important works in the U.S. In 2006, Henry and Elizabeth Segerstrom commissioned Richard Serra to create the monumental Connector, Serra’s largest sculpture until that time.

Mr. Segerstrom’s drive to create a world-class cultural center gained impetus when the highly regarded South Coast Repertory Theatre Company approached the Segerstrom family for help in building a much-needed new home. In 1976, he helped organize a gift of land from the Segerstrom family to the theater company, the first in a series of land donations to Orange County arts organizations that would eventually total 14 acres.

In 1980, Mr. Segerstrom became the founding chairman and led the fundraising effort that would create the Orange County Performing Arts Center (OCPAC) on part of that land. The capital campaign raised $74 million in private funds to build a 3,000-seat Segerstrom Hall and endow OCPAC, with no government funding sought or accepted.

In response to the growing demand for the performing arts, plans were soon in development to construct a Lincoln Center-type complex by building an additional performance venue on the OCPAC site: a dedicated symphony hall. Mr. Segerstrom made a personal pledge of $40 million (which eventually rose to $51 million) toward the construction of the Renée and Henry Segerstrom Concert Hall, which opened in 2006. An expanded facility for South Coast Repertory Theatre was completed nearby on land also donated by the Segerstrom family.

In recognition of the Segerstrom family’s contributions, the entire arts campus was renamed Segerstrom Center for the Arts in 2011. Not content to have guided the development of this complex, Mr. Segerstrom also took the lead in filling it with world-class programming. In 2006, to inaugurate the Cesar Pelli-designed Renée and Henry Segerstrom Concert Hall, Mr. Segerstrom and his wife Elizabeth orchestrated a three-week Mariinsky Festival, which included the North American premiere of the Mariinsky’s critically acclaimed production of Wagner’s Der Ring des Nibelungen, conducted by Valery Gergiev. The opening also included a Pacific Symphony-commissioned work by William Bolcolm based on seven poems by Federico Garcia Lorca, sung by Plácido Domingo.

In 2007, the Segerstroms launched the Elizabeth and Henry Segerstrom Select Series, an artistic collaboration with the Philharmonic Society of Orange County, to present internationally acclaimed performers at the arts complex.

In 2009, Mr. Segerstrom established a partnership with Carnegie Hall— the first time in its history that Carnegie Hall’s special festival programming was presented to audiences outside of New York City.

Mr. Segerstrom contributed his time, resources and leadership as a board member to numerous local, national and international institutions including Carnegie Hall (which honored him with its Medal of Excellence in 2010), the Museum of Contemporary Art in Los Angeles (of which he was a founder), the White Nights Foundation of America and the American Friends of Versailles. He also served as the National Chairman of the Business Committee for the Arts from 1999 to 2002, and received the organization’s Leadership Award in 1993.

Mr. Segerstrom was dedicated to public leadership and service. He served on the boards of many corporations including Southern California Edison, Union Bank, Security Pacific, Bank of America and Safeco. He was publicly elected to serve on the Orange County Water District board for more than 20 years, including as chairman. During his tenure, the district was a leader in pioneering efforts to replenish the aquifer that underlies Orange County and protect it from salt-water intrusion. He led a team including Stanford University engineers to develop innovative reverse osmosis for a coastal desalination plant. This groundbreaking technology was later shared with Israel, earning Mr. Segerstrom the Tree of Life Award from the Jewish National Fund, presented to him by Margaret Thatcher.

The many honors and awards presented to Mr. Segerstrom include a Knighthood by His Majesty Carl XVI Gustav of Sweden. In 1986, he was awarded an honorary Doctorate of Law from Western University, and in 2002 he received an honorary Doctorate from Whittier Law School. In 2008, he was awarded the annual Ernest C. Arbuckle Award by the Stanford Graduate School of Business, its highest alumni honor.

Henry T. Segerstrom leaves behind an unparalleled legacy of dedicated community leadership and a lifelong commitment to Southern California. Mr. Segerstrom’s vision, work ethic and unerring aesthetic helped transform a largely agricultural region into a diverse and thriving center of art and culture, innovation, entrepreneurship and leadership in business and technology.

Mr. Segerstrom is survived by his wife Elizabeth, his children Andrea, Toren and Anton, their spouses, six grandchildren and seven great-grandchildren.

A public visitation and tribute will be held at Fairhaven Memorial Park in Santa Ana, CA, on February 28. Visitation hours are from 10:00 AM until 6:00 PM.