In honor of the life and legacy of Henry Segerstrom, South Coast Plaza welcomes the public to the exhibition Courage of Imagination, on view from May 8 through July 5 in a specially designed gallery within Jewel Court. 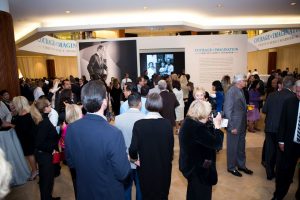 Costa Mesa, CA, May 3, 2015 — “Courage of imagination” was the quality that the great Japanese American sculptor Isamu Noguchi used when he described Henry T. Segerstrom (1923-2015). Noguchi praised Segerstrom for the combination of entrepreneurial drive and daring vision that he applied to everything he did, from establishing South Coast Plaza and building it into an unparalleled international destination for luxury shopping, to transforming his native Orange County, California, into a culturally rich cosmopolitan community.

Now, in honor of the life and legacy of Henry Segerstrom, South Coast Plaza welcomes the public to the exhibition Courage of Imagination, on view from May 8 through July 5 in a specially designed gallery within Jewel Court.

Through dozens of vintage photographs, archival videos, informative descriptions and a selection of major sculptures by Alexander Calder, Jean Dubuffet and Joan Miró, the exhibition reveals the remarkable story of Henry Segerstrom, beginning with his early years as the child of farmers through his rise to one of Southern California’s most honored civic, business and cultural leaders. By telling this story, the exhibition encapsulates the history of Orange County itself, from a largely rural area into a thriving center of art and commerce.

“This exhibition came to life as a result of the outpouring of love and support by so many people from all over the world whose lives were touched by my husband,” said Elizabeth Segerstrom, in speaking of the origins of the exhibition. “I am especially pleased that Courage of Imagination is recognized and supported by the Governor of California, the Board of Supervisors of Orange County and the Mayors of Costa Mesa, Santa Ana and Newport Beach. Henry was deeply proud and committed to bringing the best to Southern California.”

The exhibition explores the Segerstrom family and Henry Segerstrom’s early career; his deep involvement with the visual arts and architecture; his close relationships with artists, colleagues and community members, and his role in creating Segerstrom Center for the Arts; and his development of the enterprise that was the center of his business life and his greatest pride, South Coast Plaza.

Henry Segerstrom’s passion for the arts and his charismatic community leadership were recognized with honors including Carnegie Hall’s Medal of Excellence, one of only four such awards bestowed by the institution in its 108-year history; the Tree of Life Award from the Jewish National Fund, presented to him by former U.K. Prime Minister Margaret Thatcher; a knighthood presented by His Majesty Carl XVI Gustav of Sweden; the Leadership Award of the Business Committee for the Arts, an organization that he served for several years as its National Chairman; Honorary Doctorates from Western University and Whittier Law School; and the Ernest C. Arbuckle Award of the Stanford Graduate School of Business, its highest honor. Courage of Imagination brings to light the man behind the awards.

Henry Segerstrom’s wife, Elizabeth Segerstrom, oversaw and selected the art, photographs and memorabilia for the exhibition.