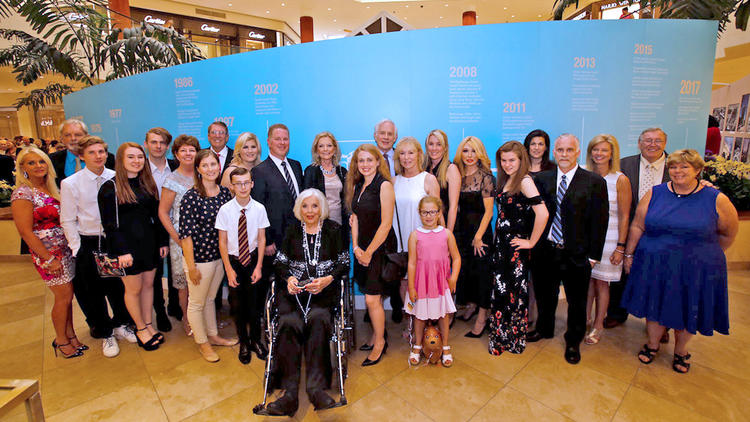 “Every extra dollar earned was saved for the eventual purchase of land,” confided the late Henry Segerstrom in an interview conducted some 10 years ago. “That was one of the lessons of my childhood that was never forgotten.”

It was a lesson Segerstrom recalled when as a boy, he remembered his father authorized some money to be spent on a carpet for the living room of their home in Santa Ana’s Floral Park neighborhood.

His mother made the occasion into a memorable trip to Los Angeles with a young Henry and his older sister Ruth Ann to pick out carpet from a department store.

It was the experience of youth stamped on the psyche of a boy that would grow up turning the family farm land into one of America’s prized shopping, dining and cultural centers.

Family was an anchor for the Segerstrom clan dating back to their 19th century immigration from Sweden to the Midwestern United States.

First landing in Minnesota — followed by a time spent living in an upstairs walk-up apartment in an old brick tenement building in Chicago — the family finally came to the uncharted rural Orange County.

A certain sense of sophistication and civilization existed in the Victorian buildings that enhanced Santa Ana’s small town atmosphere in the late 19th century. The city had hopes of big dreams.

All of this legacy is chronicled in an impressive Segerstrom Family exhibit on display through July 30 in Jewel Court at South Coast Plaza.

Open to the public, this museum quality family retrospective traces the Segerstrom journey from its earliest days to the present.

Also very involved as co-creators of the exhibit were Elizabeth Segerstrom and Ruth Ann Moriarty.

The display is more than just a tour through Segerstrom family history — it also is very much a glimpse into the overall evolution of life in the region.

“You know what it truly amazing?” Grant asked. “It’s the fact that this family more than 100 years ago had the foresight as well as the money to archive their lives through photography, which was not such a common practice.”

Grant went on to share that the result is a valuable archive of the life and times of people over more than 100 years of major advancement and change in the American milieu.

He joined his wife, Andrea, children, grandchildren and extended family to welcome a major turnout of local citizens coming to tour the exhibit.

Among the significant Segerstrom family members in attendance were Ruth Ann Moriarty and her daughter Jeanne Moriarty, son Richard Moriarty with his wife Marlyn, Sandy Segerstrom Daniels, relatives Susan and Steve Perry and Sally and Toby Andrews, and Henry Segerstrom’s widow Elizabeth, who among others, carries on the family legacy with tremendous passion.

The very fashionable blonde wife of the late retail magnate has taken on her late husband’s ambitious life force with her own distinct style and manner.

Henry Segerstrom lived by the adage that “only the best will do,” and it is a mantra carried on by Elizabeth not only at South Coast Plaza, but also in major endeavors in the arts, and beyond where the Segerstrom influence is considerable.

Elizabeth joined the Grants to welcome a diverse cross-section of influential county citizens.

“The Segerstrom family’s story is uniquely American in that it’s one of humble roots, perseverance and hard work,” Elizabeth Segerstrom said. “It’s also an immigrant story, one which I’m certain can resonate with the public as all American families were, at one time, immigrants.

“Just as C.J. Segerstrom and his wife Bertha first arrived in Orange County from Sweden, assessed the land and saw great potential for community growth through agriculture, Henry would later follow suit in the same spirit —imagining even more for that same plot of land.”

Elizabeth Segerstrom is dedicated to the course set by her late husband.

“It is now my life’s mission to live and work in Henry’s magnanimous and giving image — he was not only a patron of the arts, but a true aficionado and lover of visual art, dance and music,” she said.

“Even as a young boy with roots in a farming community, Henry would travel to Los Angeles as a young man to visit museums and hear the symphony. It was this passion and curiosity which inspired him to bring these artistic gifts to his own community in Orange County.”

Touring the exhibit will offer a glimpse into the history of Orange County, an educational experience for students of all ages.

“I think the public will most enjoy the exhibition’s comprehensive snapshot into what day-to-day life was like for Southern Californians in the late 1800s; what it took to toil, sculpt and shape this land into what it is today,” Elizabeth Segerstrom said.

“While of course, the photography and ephemera throughout our show is of peak interest, I feel that people respond most personally and immediately to the collective portrait of a family over time. It’s something we can all relate to — the shifting face of a family throughout the years and within a community is always moving and relatable on an anachronistic level.”