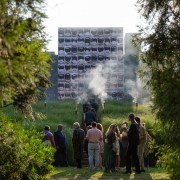 Guests included Nicole Miller, Damian Loeb, Peter Marino, and Isabella Rossellini among over 1,000 other attendees, all of whom enjoyed walking the grounds of the Center while taking in the over 25 performance pieces tucked and scattered throughout the property’s breathtaking landscape.  From music to dance to theatre to video, guests were propelled through a labyrinth of discovery, serenaded by the eclectic sounds of Wilson’s musical performers, interspersed throughout the forest “gallery”.

The Watermill Center was founded by avant-garde visionary and theater director Robert Wilson in 1992 and remains a beacon for artists from all over the globe.  The Center came alive on the 27th as guests enjoyed not only the spectacle but a silent auction during cocktail hour hosted by Artsy and a live auction during dinner hosted by Simon de Pury.  Artists featured in the auctions included Robert Longo, Katherine Bernhardt, Anish Kapoor, and Sam Falls among many others. The evening’s event raised over $1.7 million dollars and welcomed artists, collectors, gallerists and influencers from all over the world.

Elizabeth Segerstrom is a co-managing partner at South Coast Plaza, the renowned international shopping and dining destination in Costa Mesa, California. Her philanthropic leadership has made an enormous impact on the cultural climate of Southern California. Elizabeth shared her passion for the arts with her late husband, Henry T. Segerstrom, and continues to uphold his profound legacy in the arts institutions in which he was involved, including Segerstrom Center for the Arts, where she sits on the board of directors. Most recently, Elizabeth Segerstrom Attends Renowned Pianist, Lang Lang’s Wedding.