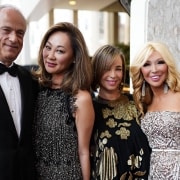 COSTA MESA, CALIFORNIA  – June 7th, 2019 – On May 20th, 2019, Elizabeth Segerstrom attended the American Ballet Theatre’s 2019 Spring Gala at the Metropolitan Opera House, continuing her strong support of the world-renowned ballet company. As an annual fundraising event, the proceeds of the 2019 Spring Gala will support ABT’s education and engagement programs as well as America’s National Ballet Company.

The evening honored Andrew F. Barth, Chairman of the ABT Board of Trustees, and celebrated the 10th anniversary of accomplished Russian choreographer and dancer Alexei Ratmansky as ABT Artist in Residence. The gala also featured the highly anticipated world premiere of “The Seasons,” choreographed by Ratmansky and set to the iconic score by late Russian Romantic composer Alexander Glazounov.

This year’s event was chaired by Elizabeth Segerstrom alongside Emily and Len Blavatnik, Pamela and David B. Ford, and Sutton Stracke. Elizabeth Segerstrom previously chaired the 2017 Spring Gala, which featured the New York premiere of the highly acclaimed “Whipped Cream,” also choreographed by Alexei Ratmansky.